skip to main | skip to sidebar

Scroll down through my latest work, or navigate through the categories on the right hand side.
Click here to return to www.brynhughes.co.uk at any time.

Bryn was born in the small mining village of Tonmawr in South Wales. His artistic talents were recognised early, winning competition after competition, throughout his primary and grammar school years.

In the early 60’s Bryn left his beloved Wales to study Architecture at the University of Sheffield. Success followed him, winning academic prizes for design and draughtsmanship, as well as sporting trophies for achievements on the rugby field.

After qualifying as an Architect, Sheffield became Bryn’s home. Today some 40 years later, he works from his cottage on the edge of the Peak District National Park.

Bryn is now travelling more than ever and paints with real passion. And, as in his early years, Bryn’s work is still being acclaimed, having been awarded several medals at recent art shows.

Bryn’s artworks are usually pen and watercolour vignettes of buildings in their landscape. He is still fascinated by how buildings are put together and how they work in their environment. This fascination is the force that drove him to be an architect.

His preferred technique is to sit in front of a building working directly in pen (without pencil pre-drawing) often with an audience looking over his shoulder. This pressure produces the adrenaline that gives his work a spontaneity, dynamism and lightness 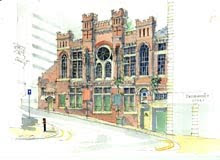